Plugged in the FoxWell NT630 Scan tool. After Navigating to the BA Ford Falcon diagnostics menu. The fault code “C1155 LHF Wheel Speed Sensor” was read out, As part of standard fault interrogating the fault code was noted and cleared. Turned the ignition on and the Fault code reset straight away after the ABS module did a self test (Details at the last part). Subsequently graphed the left and right front wheel speed sensors from the live data menu with FoxWell NT630 and found when driving the vehicle that the output of the LHF wheel speed sensor was flat line. After gaining access to the wheel speed sensor and a quick resistance check with a multimeter, found that the sensor was in fact open circuited.

Finally, the LHF wheel speed sensor to be replaced:

I was recommended to have the LHF wheel speed sensor replaced and (subsequently) once the sensor had been replaced, cleared the fault codes and test drove the vehicle to ensure no other faults remained. 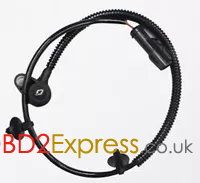 How to do ABS Module Self testing:

Due to the safety aspect of functional and Safe brake operation, The ABS Module (and the SRS Module) does a self test by supplying voltages to each pin and measuring the voltage (the short version) on it’s corresponding return pin. In an instance when the voltage is not within it’s specified parameters -IE. Too High, Too Low, Missing, The ABS module then determines the relevant fault and deactivates the ABS system and illuminated the ABS warning light. This happens during each key cycle and is why the light illuminates when the key is first turned on.