So I have one of those chinese HDS clones and Racy Jace was due to pop over yesterday afternoon, so I wanted to be sure I could get my Honda HDS HIM
connected to my Accord before Jace got there.

Unfortunately this didn’t happen, no matter what I tried, the darn thing would not connect, now I have always had trouble getting it connected up and its just a pain in the back side. I failed to get the thing working in time for Jace visit to my place.

After Jace left, I thought I have another go, order of connecting things up seems very important with these things, so I went shopping for them.
He confirmed that I seem to be doing everything right, connected HDS to Com port of PC (make sure it’s COM1), power on HIM (the actual box – Honda Interface Module), switch on ignition, start up HDS (Honda Diagnostic Software), click on connect, when it tells you to, plugin the OBD connector and voila it should work.

Nope still not connecting !! So I carry on messing about, try differing combos of powering it and connecting it without any joy. DD suggested that CJs theory is physical comm ports won’t work and you need a particular type of USB-serial-COM port cable with specific Prolific USB drivers. Now I do actually have this cable and those drivers installed but had no clue where the USB serial cable would be.

With the combos exhausted and with me now getting annoyed I thought I try something different, on the HDS software there is a Self Test mode but to do this self test you need the loop back dongle plugged into the end of the OBD connector, and the chances of finding that somewhere were slim. Another option was to update the firmware on the HIM. So I thought lets try that, so I try it and it asks to press the button on the HDS for a few second, I press the button and hey presto it starts updating the HIM firmware.

Great, so its not got any issues with com ports, that part is working just fine. It then came flooding back to me, last time I used my HIM I remember suspecting that there was either a break in the OBD wire that comes out of the HIM or a connection/circuit issue on my HIM that was causing it not to be able to talk to the car.

So this time I decided to take it apart and have a look inside, this is what I was immediately greeted with :-

These are the solder pins for the OBD wire 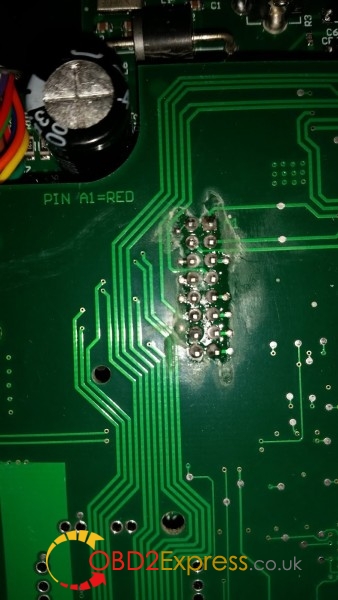 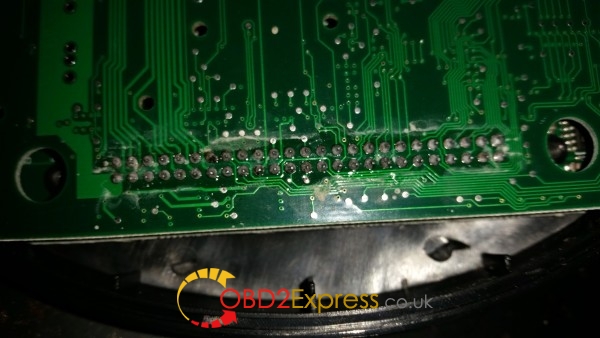 Now both sets of solder joints were looking in a right sorry state, mostly rather dull looking, these could be referred to as dud solder or cold solder joint, which could result in giving bad electrical connection.

So what they needed was to be reflowed but there were a lot of them and do properly them one at a time would a real ball ache.
So what I did was take my gas soldering iron, remove the solder tip and use it with a naked flame and just heat up all the joints. 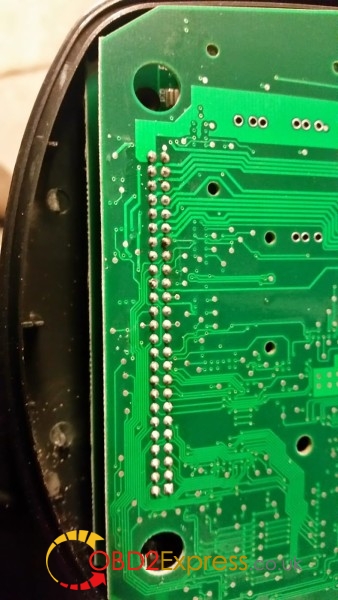 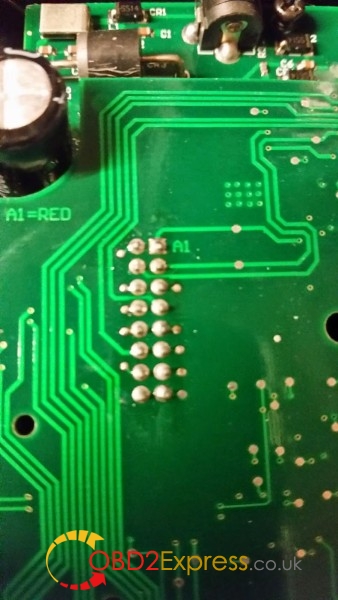 Actually those pictures aren’t that great but the end result was that all the solder joints looked much much better, they all now had a shiny look to them rather than a dull look.

So I reassemble the HIM, connect it back and hey presto it connects straight away !!! Yippy, I now have a working HDS setup once again.
So it never was a COM port issue, it was a problem in the HIM device