I’d like to chip in with some words of VXDIAG VCX NANO GM model– the good, the bad and the ugly.

So being that this the C6 forum, lets just focus on the C6 corvette and the GM VXDIAG VCX NANO.

Out the gate the VXDIAG VCX NANO is a cloned copy of the MDI to a degree (not the much faster MDI 2). This means that as it using Tech2 win emulator software to work with the MDI software since the MDI software does not pick the NANO up natively instead.

Now the bad,
As for the only thing that you can’t do with the Tech2win emulator software, is can not do any perimeter changes to ECM (it can still be read, but no changes made to the ECM programming). The BCM and the rest of the other modules, not a problem getting access and changes to them.

So let really get down to the meat of it, and since you can get BCM and the other module change access, getting deep into the BCM to deactivate F55 is not a problem as well as changing out the RPO codes on the BCM as well. also, all the special features needed like ABS pump cycle , relearn for radio, fob programming and such for the other not ECM module, just like a tech II and clone as well.

Now the ugly, since again, you need to use TIS2000 to flash such items like firmware, and some cases, ECM programming as well, here is the glitch, since not only does the NANO not come with a working copy of TIS2000, not sure it will work with as well.

So the fact that the NANO GM device does not come with Gm TIS2000, Not really sure if it going to work with Tis2000 to start with.
Again, maybe its my win 10 64 bit machine, but when opened TIS2000, it looking for an actual Tech II, and which does not giving me the option of selecting the the NANO device as well. Hence the two screens that pop up to select the device are part of Tech2win emulator software, so when you open up Tis2000, it not opening up that software to being with. Hence the reason that I beleive is the NANO is going to work with TIS200, then someone is going to have to crack that software as well to work with the NANO device.

So, for someone that will wrench on the C6 ,and needs a Tech II for anything else than changing ecm peramiters or flashing in firmware, the NANO with it Tech2win emulateur software is very good tool for that (if you have a machine that it will load on, since again, will not work on my win 10 64 bit machine). But, and here is the huge one, unless Vxdiag has a way for Tis2000 to select the NANO to work with Tis2000 (again, was not getting the pop up screens to select the device to work with the NANO), then don’t see if working with TIS2000 instead.

So, do I think the NANO and the software you get with it as good as than the Tech II clone, No. The tech II clone come with level access to do ECM peramiter changes, and also a working cracked copy of TIS2000 as well. Hence with saved firmware files for your car, you can reflash modules at will.

So the niche for the NANO GMis really for someone that the dealer may gouge for say a radio relearn, adding in a XM channel to a radio, having to delete F55 module, and the other items that a Tech II comes in handy for, as well the needed information to pull up codes in say the BCM. It also a good tool to pull modules information and testing when you are wrenching on the car as well

If you need to do the extra step and get into the ECM parameter changes or even have to reflash firmware, then you really need a hand held Tech II or clone and its TIS2000 software that comes with it instead.

Now to touch on Gds2 software since it does come with it, and will be handy for other GM cars that you may have as well. Hence what GM car models/years that you use a tech2 win/ Tech 2 with Tis2000 as the pass through or gds2 software instead, the below link has a good chart. 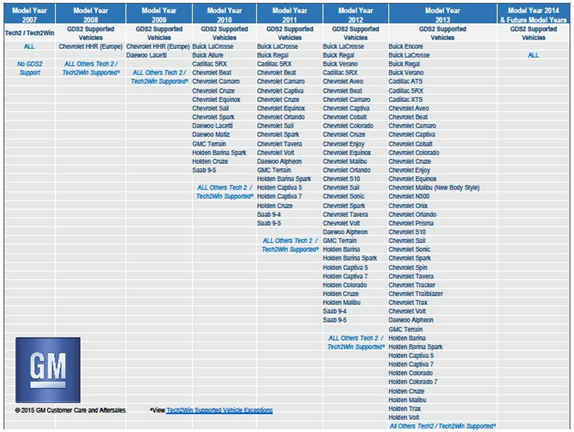