The Chinese clone systems SD connect C4 work OK, but for the W205 you’re mostly dealing with diagnostic support. There are still things you can do such as teach-in processes etc, but for the W205, MB largely disabled support for offline coding using Xentry (well, not entirely, but effectively) , so to do any module software updates requires Online SCN, which needs a dealer login to work. You can do some of the things you want in Vediamo, but also be wary of that. Several of the modules in the car are protected (i.e. locked; e.g. the engine ) and although you can read data, you won’t be able to write config bits back unless you have the key algorithm to unlock it. There are people who will sell you a unlock (most are session based) and the same holds true for Online SCN coding, but it’s a shady business IMO.

The following parts are quoted from mbworld.org forum.

PS: you can jump to the last paragraph.
I bought a kit of SD connect c4 just over a year ago. The hardware & software is far more than just for diagnostics. There’s parts manuals, repair instructions etc etc. Depending on the software and how adventurous you want to get there’s also a Pandora’s box of different ECM things which no dealer would be willing or generally able to toy with. Of course there’s also the possibility and opportunity to really screw up your car (Yay!).

Anyway, I thought I’d write up a quick review summary of my own experience in purchasing a full diagnostics kit – especially in reference to the W205.

What’s it like, what do you get, what can you do, etc… so here we go, my take on the full diag suite – get a big glass or wine (or beverage of choice) and settle in for what is hopefully and enjoyable and informative read.

This kit is a full Mercedes Benz diagnostics system. In a nutshell the components of a full kit comprise:

A suitable computer (in this case a Dell630)

Rather than clutter this intro, refer to the below sections for more detail on each component. Do you need everything listed above to get started? .. no, probably not. In principle you do need all those parts to perform full diagnostics but you can purchase bits from various vendors and you may even have some existing bits or are able to source software from other avenues (let’s not get into that ).

The one thing you do get quite nicely with a kit like this is, out of the box plug-in and go functionality. No mucking around loading software, stressing over setups, keys etc. You buy, you get, you use. Simple.

Well.. duh, the internet of course – just making sure you don’t go into your local MB dealership asking for a kit .. you know .

Who do you buy it from? .. that I cannot fully answer, since I purchased my first kit and hence have no relevant comparisons to draw. Arguably the Chinese are the No.1 player in this market. They are the ones who clone the hardware and are certainly the prominent purveyors of such kits at a price point which suits the average punter.

One thing I do suggest is that you strike up a conversation with your potential vendor of choice before handing over your credit card. Unless you speak fluent Mandarin or Cantonese, it’s handy to know that your vendor will be able to understand your questions in relation to support/warranty or other things (and believe me, you will have questions!).

The second main point is to determine how reliable you feel the vendor is. I know it’s difficult to judge. Nobody knows who’s who on the internet. My guiding principles were to look at vendors who had an established track record in terms of their web presence and had reviews stretching back several years. Anyway, enough said on that – do your research and don’t just go looking for the cheapest price.

So once your order is placed, a very short time later you will receive a nice brown box like this: 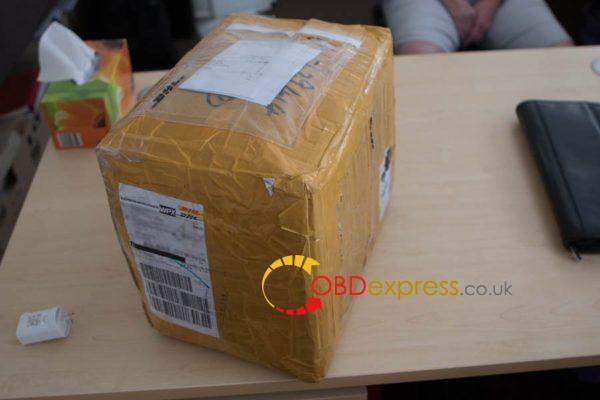 Everything seemed nice and safely wrapped. 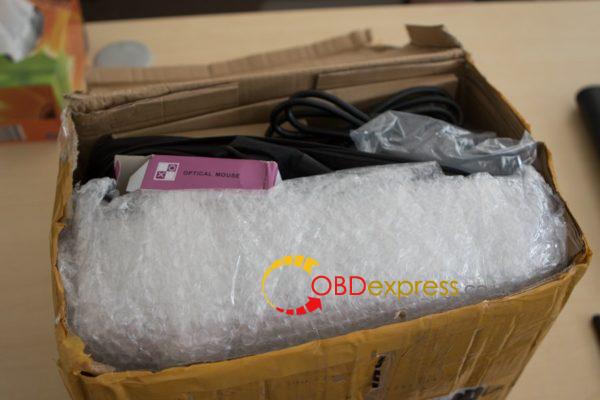 Items removed, we had essentially all the parts I listed in the intro – plus a carry bag for the laptop, a very ordinary USB mouse, plus power adapter and cable to match your country (which was a nice surprise). 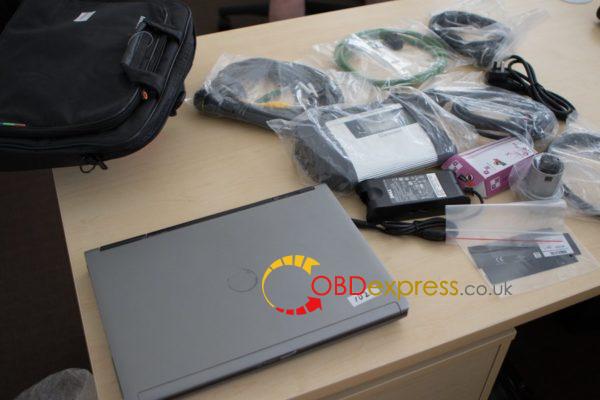 Overall – everything seemed quite OK and arrived safely. The computer was a tad old and cosmetically damaged (to be expected) but everything is fully functional.
OK, enough of the package – let’s look at each component in more detail. 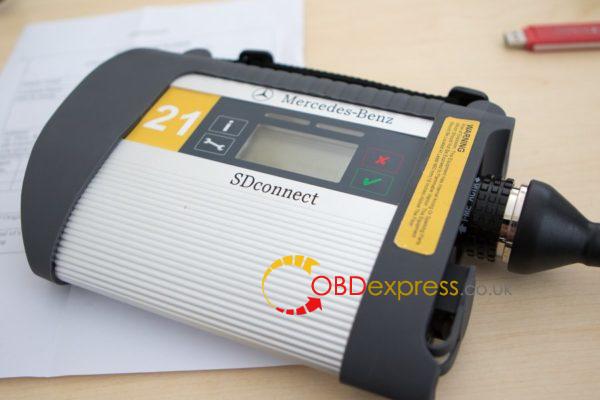 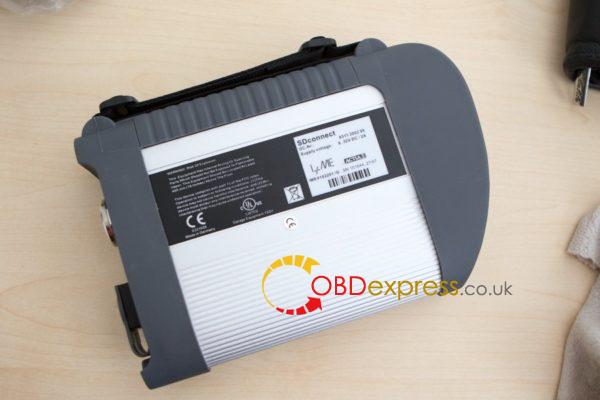 The plastic end parts can be removed to reveal the slot for the WiFi card, plus the battery compartment and SD Card slot. 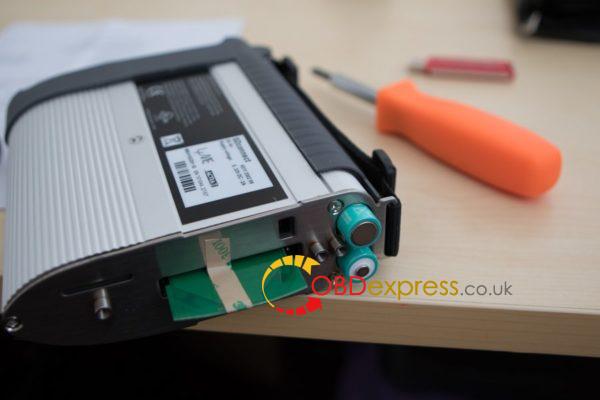 Note that the battery compartment holds six AA rechargeable NiMH batteries to support powering the multiplexer whilst not connected to a vehicle. My unit shipped without batteries (boo!) which I then rushed out to purchase separately. Whether you really need to place batteries into the device is questionable however. There is no charger which ships with the multiplexer, so unless you use it a lot, the batteries will go flat quite quickly anyway. OEM equipment has a charger (which plugs into the RJ45 port) but I’ve never seen a single Chinese vendor selling one. In my tests I found that the unit seems to behave exactly the same, whether there’s batteries in it or not – although batteries do eliminate the “Low battery” indication which is otherwise shown on the LCD.

On the opposite side you will see the RJ45 network port for connecting your diagnostics computer (seen below on left with grey flip cover) and the MB proprietary cable connect (on right) which goes to the vehicle. For the W205, you will only need the OBD cable. The kit however comes with cables to suit all older style cars, trucks etc. as well. 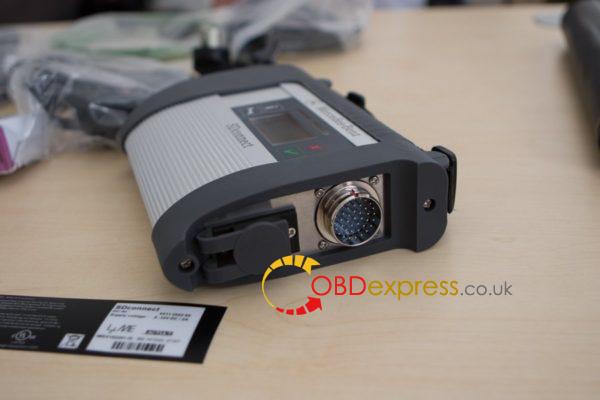 One thing that impressed me with this particular kit was the quality of the connectors and cables. Everything seemed very good I must say.

Top of the unit has a backlit LCD display, two LED indicators, and four buttons. The LCD indicates Power Supply status, Connection Type, and Working Status. The LEDs are used to indicate a variety of working status signals and the buttons give you the option to bring up information about vehicle or device battery status, display network addresses, put the unit into standby and so forth.

Essentially there is not much that the unit does on its own; not even an OBD scan or the like. It needs to be connected to the car and a computer to represent any value.

Now this is where the fun and games really start. Boot up your laptop and you’re soon presented with a Windows XP OS, which has obviously been customized to the Mercedes Software installed on the device. An early indication of that is the taskbar which prominently displays connectivity between the computer, the multiplexer and associated networks (e.g. internet/server) in the lower right of screen.

There is a lot to learn here for newcomers. The software changes very regularly (sometimes monthly) to keep up with the latest developments. Not surprisingly the vendors from China seem to have their finger on the pulse quite well in that regard. My kit contained December 2015 versions. I don’t think there’s any need for concern with constant updates however. If you can diagnose your car with the modules on-board then you’re good to go. The Workshop info will probably be one of the benefactors of regular updates but most of that service info is already in abundance, as you will see later. 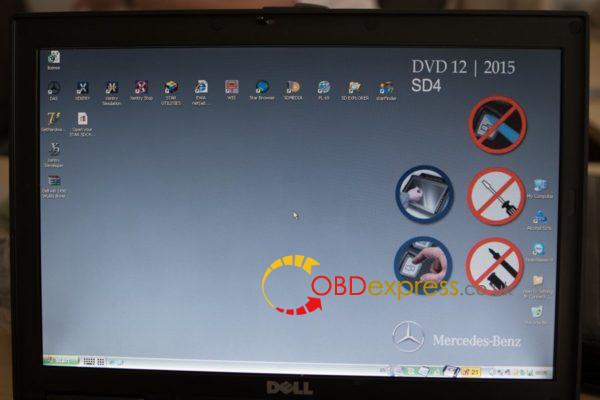 Without writing the Never Ending Story here, let’s just say that the software suite is extremely comprehensive and caters for not only passenger vehicles but also trucks, buses, cranes – and other large industrial equipment dating back through the ages. To keep this piece relevant, I’m going to focus, as best I can, only on the bits applicable the W205.

I also will not go into the various configuration software components, such as installation, authentication, key security, registration, connectivity and so forth. If you are curious, feel free to PM me or do some Googling on the net because there is adequate information out there if you’re willing to look for it.

Let’s look at the main sub components to the suite that are of interest to us:

FYI, have you ever seen BENZ eCOM, looking like this: 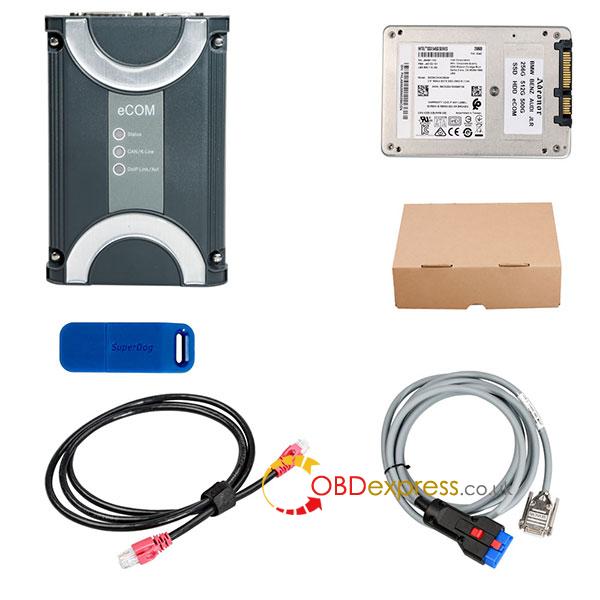 Ecom supports the CAN/DoIP protocol, which can be used to diagnose and programming (brushing & writing) for the new car audio and video entertainment systems.

The Mercedes-Benz engineering database of diagnosis / coding / retrofit /flashings is using the Xentry database, so the Mercedes-Benz engineering version depends on the version of Xentry, as long as the database is new, the V4.00 version can be used on new models. compact3 can be used.
SDC4 does not support ODX documents. The latest V5.00 uses eCom to support ODX files. It is recommended to use Ecom, with DoIP function, the speed is faster and more stable.